Building on what we learned about RTFM last week, we converted our blinky code to use the RTFM scheduling facilities.

The goal was to blink the device LED on and off. We’ve done that before, but using a loop to tie up the CPU for (say) a second between the LED blinks. This time we’ll use RTFM to schedule the LED for us. That will allow us (in future session) to do other things at the same time, such as reading input to control the LED.

As an outline, here’s what we ended up with:

I paired up with franssl this week, and the code I’m presenting is based on what you’ll find over in their repository. For me, this week was about just getting it to work, and then rationalising how it worked afterwards (which is what I’m doing right now).

The code I’m working with here is in a Github repository. Here’s the relevant parts of main.rs, which I’ll explain next:

The first difference from last time is that we’re declaring a resource structure:

As the RTFM manual describes, resources gives us a way to share data between parts of our programme. In our case it’s between the init function at start up, and the blinky function we’ll write to turn the LED on and off.

Specifically, these are “late resources”, which means values not known at compile time. The structure is initialized at the end of init by wrapping the values we want to use in init::LateResources. The last value of the function is the return value.

We need access to the LED itself, we’re using a flag to indicate if the LED is currently on (or not), and a port for logging.

Regarding logging, the ITM (Instrumentation Trace Macrocell) logging is just way faster than the semi-hosted logging (hprint!) we’ve used up to now. It is, however, an option feature, and not all Arm processors support it. Ours does. There’s tons of information about ITM in the The ITM and the quest for faster logging post. What it means in practice is we can use iprint! or iprintln! with a specific port and the output appears much faster in a file called itm.txt. That’s all configured in openocd.gbd.

By default the values in the Resources struct are &mut. You can change that, but it’s perfect for us because we need to write to the LED, the ITM port, and flip the is_on bool.

The init function is pretty straightforward. It grabs the resources, and schedules a LED blink.

In order to do the scheduling, you have to declare what you want to schedule in an attribute:

One thing that tripped us up was forgetting to enabling the timer. Without this block of the code, nothing was scheduled:

I’d also missed the RT feature in my Cargo.toml:

…and without that, which appears to be needed to enable interrupts to be used, nothing would schedule for me.

The scheduling itself is this line:

I would have expected to have a schedule function that took some other function as an argument. But it’s apparent that RTFM makes use of macros to give you calls like schedule.blinky. The argument is a duration of when blinky should run, in clock cycles. We set this to one second via a constant PERIOD of 48,000,000.

On the day this all worked, but our scheduling would stop after a while. It looked like it could be an arithmetic overflow problem, as it would stop right after scheduling for a time suspiciously close to a power of 2 boundary. We didn’t resolve this on the night, but it lead to a discussion resulting in Tim pointing us to the excellent Myths and Legends about Integer Overflow in Rust.

The problem went away by either:

The function to turn the LED on and off also needs to declare what it wants to schedule, and what resources it wants to access:

With this in place we can read and write to is_on and friends, and schedule ourselves to be called again.

Finally, we also need to define a free interrupt for the schedule to use:

Missing this out was a compile error, but it took us a while to figure out what we could use here (from the stm32f411xx crate). Also the timer queue documentation was useful.

For fun, I tried an alternative version of the code to reduce the amount of mutation going on. It’s in a ping pong branch and what it does is:

For all these weeks, I’m primarily using Visual Studio Code for development: 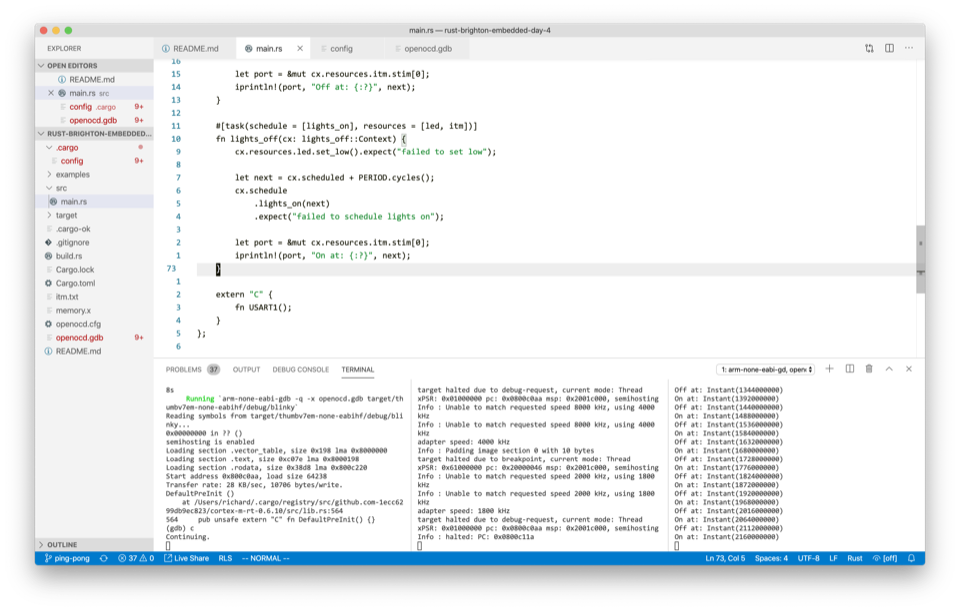 We now schedule a blink using interrupts and timers provided via the RTFM framework.

I found the heavy use of attributes and macros to be hard to follow. But since the session I’ve had a look at the cortex-m-rtfm documentation. That helps explains much of what’s happening.

Running the code produces the same effect as last week, but we can now (in principle) have the hardware do something else while controlling the LED.

This week we learned about Real-time For the Masses (RTFM), which gives us tools for concurrent programming on our embedded hardware.