A Review of "CouchDB: The Definitive Guide"

Published by O’Reilly Media, and available online under a Creative Commons license.

This first edition is inevitably out-of-date compared to 1.0 of CouchDB, has room for improvement, but is nevertheless a useful introduction to CouchDB and thinking about things in the CouchDB-way.  A pleasure to read.

The sense I get of NoSQL products, such as CouchDB, is that they are good for certain kinds of problem and have potentially great performance characteristics.  I’m nowhere near pushing the capabilities of relational databases, but I was interested in understanding how problems are approached from a NoSQL perspective.  After all, how can I tell if I have a problem suitable for a NoSQL database if the only way of thinking I have is SQL?

I picked up the EPUB version of CouchDB: The Definitive Guide not with the aim of using the product for any particular project, but to get a sense of what the NoSQL movement is about, and how it changes the way you think about problems.  The foreword from Damien Katz, the creator of CouchDB, gave me confidence I had the right text: “The reason for this book is that CouchDB is a very different way of approaching data storage. A way that isn’t inherently better or worse than the ways before—it’s just another tool, another way of thinking about things. It’s missing some features you might be used to, but it’s gained some abilities you’ve maybe never seen. Sometimes it’s an excellent fit for your problems; sometimes it’s terrible”.

CouchDB wants you to think in terms of documents.  Real-world, self-contained, messy, documents.  If you’re modelling an invoice, the address for the invoice would be in the document, not a reference to another document.   No mobile (cell) number for a particular invoice? Fine, then leave it out of that document rather than being there as a mandatory yet NULL field.  But if you get a number later, the document can evolve to include it.  Storing arbitrary documents sounds like a recipe for disaster, but this is avoided by supplying an optional JavaScript validation function. The CouchDB server will reject documents that fail validation.

What you’re left with is the benefits of simplicity: you can look at a document and it makes sense by itself (or at least has that potential); and the API for storing and querying documents is the REST model of PUT, GET, DELETE.

In practice you run a CouchDB server, and insert documents represented as JSON, making a document a wrapper around the usual JSON data types of string, number, boolean, arrays and hash maps.   There are language-specific APIs for this, but as the authors say “almost all languages have HTTP and JSON libraries”.  Many of the examples in the book use cURL to show exactly what’s happening when interacting with CouchDB.

Queries, called views in CouchDB, consist of a map function and an optional reduce function, both implemented in JavaScript.  The map part defines the set of information you’re interested in.  It’s applied to each document in the database, and it can emit zero, one or more key/value pairs.  Of course, this isn’t run each time you make the query.  What you’re defining is an index, run once, and updated after document changes, which produces a data set sorted by the key. This can be combined with filters and ranges to select a subset of the results from a view.

The reduce function allows you to produce aggregate results such as sums.  The weakest part of the book is the explanation of reduce and this could be clearer.    However, if you’ve dabbled in functional programming, some of this may make you feel at home: defining a mapping function, filtering… it’s not far from what you know.

The obvious question from SQL-land (“what about joins?”) is answered by way of an example of blog post comments.  The blog post and the blog comments are separate documents, which is great for performance as there are no locks when adding comments.  A query can return all posts and comments, ordered by blog post ID.  You can then select from this view just the post ID you want, which will give you the information you need to show both the post and comments.

What makes all this fast is the B-Tree implementation, and it’s reassuring to see an appendix and parts of the book dedicated to explaining how the magic works under the covers.  I don’t need to know this, but it’s great to see this in front of you, rather than just hand-wave about what CouchDB is capable of.

CouchDB doesn’t stop at document storage and retrieval.  There are two other key elements.  The first is that CouchDB can host  whole applications.  You can define an application in terms of JavaScript functions that live inside a CouchDB document (a “design document”).  These functions can produce HTML or whatever you need from inside CouchDB, which is conceptually a nice fit with the RESTful and JavaScript underpinnings of the server.  If you have database based on web technologies it’s not a stretch to host the whole web app.  It’s entirely optional, but I can see the attractions.

Updating a design document each time you make an edit would be tedious, but CouchDB offers a CouchApp tool to expand your application onto disk for easy editing.  This gives you a layout that won’t be too unfamiliar to developers who use Rails or other convention-based frameworks.

The second key feature is replication.  CouchDB supports replication from one database to another, defined by a URL, meaning it can be local or remote and it makes no difference to CouchDB.  An offline database can use replication to bring itself up-to-date and transmit offline modifications back to the mothership or peers.

Conflict management is handled by a mandatory revision value on every document. To make a change to a document, you need to provide the revision number you’re editing, and the server will reject a change if you’re not editing the latest revision.  During replication, however, conflicts are flagged in the document, and an algorithm ensures that all instances will pick the same document as the winning document and make it the latest revision (it’s based on the history size and the sorting order of the document ID).   You can then find these documents and apply your own conflict resolution and replace the winner.

You might expect this would make CouchDB great for implementing something like infinite undo, but previous document versions are not guaranteed to be retained.

What I’d like to see more of in this book are the idioms or patterns for document thinking.  For example, there’s a section describing how to achieve document ordering in a to-do list application. If you want to move an item up your to-do list, rather than change a position field on every document to maintain an order,  you can set your document index to be the floating point number which is the average of the positions above and below your insertion point.  That has it’s own problems, but is a nice example of a different approach to problem solving.  There must be more nuggets like that in the CouchDB community.

In a similar vein I’d love to see more on recipes for different applications and an expanded “cookbook for SQL jockeys” section.

I’ve only touched on the basics: the book covers bulk updates, security, load balancing, clustering, partioning, scalability (yes, the phrase web scale is used a couple of times), the API for watching changes… there’s plenty in here.  And throughout the book you’ll find hand-annotated code examples, which are a delight and comunicate a lot in a little space.

I do have some gripes.  The practical side is where I hit my first frustration with the book.  You’re directed to “appendix D” to install CouchDB, where you’re told to avoid installing from source, followed by the instructions for installing by source.  Google for “CouchOne” and install that.   When the authors direct you to run the tests after an install, they fail to mention they only work in Firefox.

There is some lovely writing on occasion, but the rough edges where the sections don’t flow or are lacking in introduction really stick out.  In some places you’re left feeling a little like a wiki page has been dragged in to the book without enough blending.  The book would benefit from an edit.

The technology is evolving, so there are inevitably mis-matches between CouchDB 1.0 and the version used in the book (a 0.9 version).   In particular, macros are out of favour and the templating format has changed.  In fairness the authors point out it’s the readers responsibility to get the right versions of software and applications, but it would have been great to have an easy-to-find download of the exact version of the blog example codebase used in the book to follow along.  But I still learned plenty from figuring out how the latest version of the blog example worked.

But those are small complaints, and overall the book does a good job of introducing the CouchDB way of thinking, and was a pleasure to read.

Running SBT (or any shell command) from Eclipse 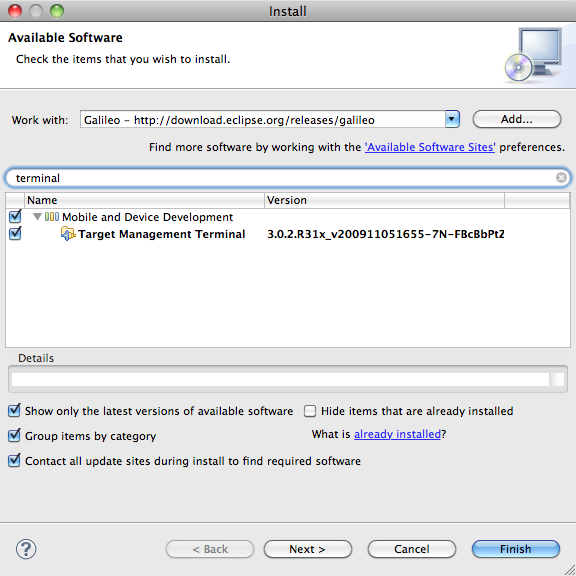 We build our Lift applications with Hudson Jenkins, and we’re in the process of converting some projects from Maven to SBT.  This is mostly straight-forward but there are a couple of non-obvious things you might need to know.