However, blogs from Lukas Hasik and Florian Beer pointed out that you can hack the mobility downloads to make it run on Mac OS X, so I took the plunge with it under NetBeans 5.5 beta with the enterprise pack. And sure, it works: 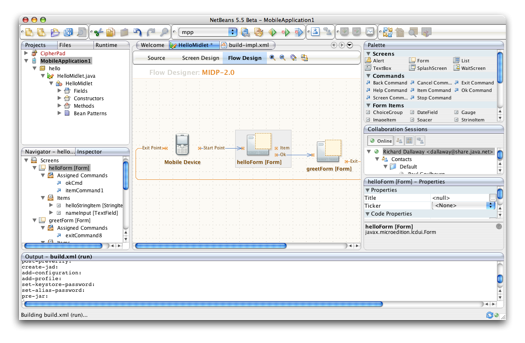 A couple of differences from the blog instructions: I didn’t add a JDK class set to my path when setting up the platform, I added the MIDP API zip (because you don’t want to try to use JDK 1.5 code on a handset just yet). Oddly, the Hello World Midlet that NetBeans generated was broken, and I’ve seen a few IndexOutOfBounds exceptions using the IDE, but I’m using beta software, so that’s fair enough.

I’m not overly enamoured with the code generation, but perhaps I’ll grow to love that as I customize it. The nice thing is about the mobility pack is the easy-to-use “press the run button to compile, preverify and run the application”. Behind the scenes it’s running ant, which is what I do anyway, but somehow just having the button to press to do it for all you makes a difference.

Looking ahead to Mobility Pack 6 there’s at least the possibility that when the mobility pack is open sourced we’ll get a ZIP distribution, but probably not full support for Mac OS X. If this is an issue you care about, take a moment to register at Netbeans.org and then cast a vote for issue 53076. Take care with the voting, because it’s not just a matter of clicking the “vote for this issue” link: after that, you need to scroll down, enter a number in the text field opposite the 53076 entry, then scroll some more and click submit.

UPDATE 2006-11-16: For the Netbeans 5.5 final release I also had to edit NetBeans.app/Contents/Resources/NetBeans/etc/netbeans.clusters and add mobility7.3 to the end of the list.