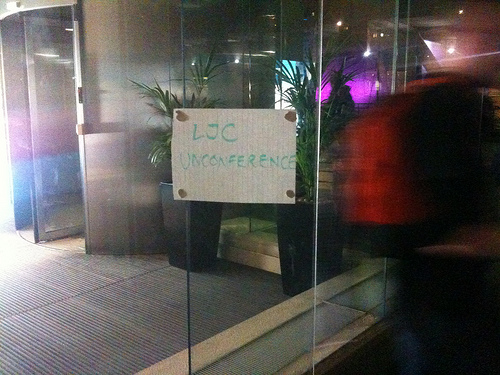 Congratulations to the organizers of the London Java Community: the first unconference was a success.

IBM kindly hosted the event at their Southbank building, and it’s a great location for an unconference. It has a set of rooms that are just the right size, but also has a central mingling point where you can meet and chat with people. Possibly for the first time at a conference for me the gaps between the sessions were as useful as the sessions themselves.

I ran a session to discuss what’s stopping anyone from using Scala, especially in existing Java projects. Kind of a negative title in some ways, but the point is that I don’t see any technical reasons not too as the tool chain is there. I was interested to hear other’s experiences. The slides from my session are online, but they were really just put up to help kick start a discussion between the 19 people who were in the room.

It tuns out there’s a detailed Google Wave covering this and other sessions, but I’ll list the main points that were discussed here:

I suggested—and it’s not an original idea—that unit testing might be a place to start as you can improve tests and gain experience. I put an example of that in my slides that I ripped out of some production code just before the presentation.

There were requests for more Scala resources (damn…perhaps I should have done an intro to Scala session too) so here are the resources I’ve found useful:

In the pub afterwards, there was a Scala corner where the London Scala User Group was reinvigorated. The lsug.org has been recovered and Skillsmatter have kindly offered to host a monthly event, probably on a Wednesday, starting in Jan 2010. Keep an eye on the LJC mailing list for news.

You’ll find my photos of the event and the hash tag on Twitter is #ljcuc1.