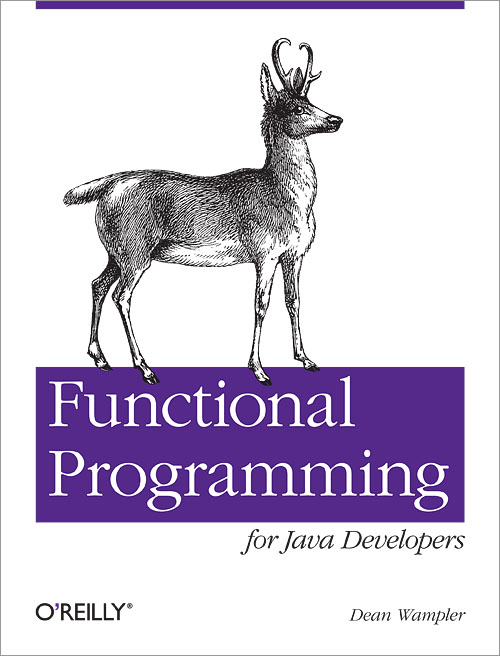 This is the book for you if you code in Java, you’ve heard of functional and want to know what the fuss is about, but you want it in terms of the constructs of Java that you already know.  “This book explains why functional programming has become an important tool for the challenges of our time” and acknowledges that “much of the literature on functional programming is difficult to understand for people who are new to it.”

In 88 pages there’s a limit to what can be covered, and sure I have some reservations, but I don’t know of a better introduction for Java developers who aren’t comfortable looking at other languages.

The first chapter addresses the “why functional?” question, which is answered primarily in terms of bringing clarity to thinking, more reuse and more concise code, and a better fit to “the unique challenges of our time”, such as “working with massive data sets and remaining agile”.  But you’re not expected to jettison what you know, with later chapters suggesting when mixing in OO is a great idea.

The detailed answer to the “why” question talks in terms of concurrency, big data sets, modularity benefits, keeping code minimally sufficient, reining in complexity—making the argument that functional programming helps you in your job in all the areas, and these are areas you need to be able to handle today.

In describing what functioning programming is (chapter 2), you get to see some Java code simplified via the Functional Java project library.  In this chapter, and rolling into chapter 3, types and data structures are introduced, via an implementation of Option (how to avoid null) and List in Java.  This is all, I think, genuinely useful, especially with the “tips” in the text and the exercises at the end of the chapters.

Tackling this subject in Java is a big ask, and around half way through the book it starts to show.  When filter, fold and map are introduced I suspect Java programmers drawn to this text may be scratching their heads asking why they would ever want to write code like this.

A later chapter introduces pseudo code to illustrate concepts in a Java-like syntax.  This isn’t going to compile, and you have to ask yourself if the text has drifted too far from Java. The author puts it well when suggesting the next place to go is “writing real code”, pointing in the direction of a variety of languages that have anonymous functions and higher-order functions… which is probably any language except Java.

That said, the chapter on concurrency points to the Java Akka implementation of Actors, which looks like something you might want to use straight away.  It’s noted that the Actor model “isn’t really a functional approach to concurrency”, but it’s part of the culture.

A concise and personal look at functional programming from the Java point of view, with some practical and compelling points about the benefits on the large (concurrency) and small (bugs in a class) scale.  If you’re drawn to this area, you’ll going to find this book valuable.  But you know you’re only delaying switching to another language ;-)

Thanks for the thoughtful review. As you can see, it’s tough to cover this subject in a short book and discussing ideas like pattern matching in Java is a challenge. If I inspire skeptics to take FP more seriously, my work will be done here. ;)