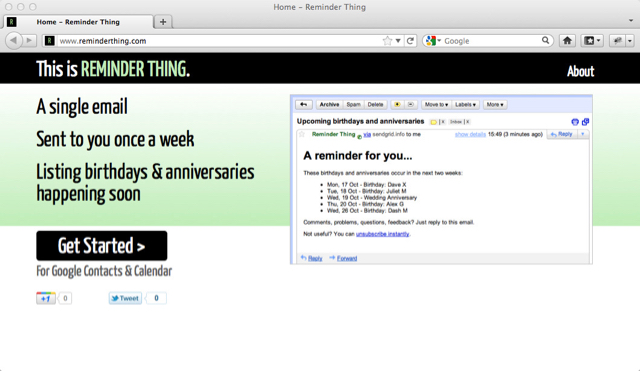 We rarely get to talk about our Lift work, but I can talk about this one because it’s been a Sunday afternoon project for a while.

That’s it.  Obviously, if you live in Facebook, you don’t need this, as they already sensibly send out such an email.  But I’ve not yet, um, fully embraced Facebook.

But this is mostly a tech blog, so here are the details. It’s a Scala app, running on the Lift framework.  It uses SendGrid to send email, and uses Google’s own AuthSub and GDATA Java APIs to communicate with Google. The UI is Twitter’s Bootstrap.

We build using SBT and deploy using SBT Cloudbees Plugin to a single CloudBees 128M cell.  I believe Cloudbees is currently using JDK 1.6, Tomcat 6 and Nginx, but I neither know for sure and nor do I especially care—if it works, it’s fast and I doesn’t give me hassle, I’m happy.

BTW, If you’re in the Sydney area and want to know more about how we deploy Scala apps, to CloudBees or AWS, go to ScalaSyd on 26 Oct 2011, where Jono is on a panel discussing Scala in production.

I have two tech observations from writing this code:

First, firing off asynchronous events to Google is a delight with Scala and Lift.  The page where we show spinners while fetching data from Google makes use of the Lift LazyLoad CSS tag (which means it becomes concurrent without me making any code changes) and a little bit of Lift Wiring (8 lines) to make the “Continue” button change colour.

So that’s Reminder Thing.  There are a couple of tweets on adding birthdays and anniversaries  from @rmndrthng, which is also the right Twitter account to use to let us know if you like the idea, anything that doesn’t work, anything we can do better.

If you’re a Google contacts or calendar user, do give it a go.