One Week with OS Maps

I like the Ordnance Survey maps, in particular the 1: 25 000 Explorer range. Intrigue by the recent launch of “download included”, I used the OS Maps app for a week. This is how that worked out.

If you’ve not seen OS Maps yet, it’s an online and mobile UK mapping application. It shows you your position on a variety of Ordnance Survey maps (not Open Street Maps or Google Maps). 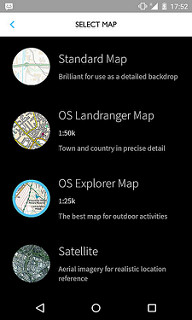 (There are more screen grabs in my Flickr album).

I use mobile mapping applications for two reasons:

I didn’t buy one of the new maps with scratch-off codes. Instead I took out an annual subscription. This gives me access to the Explorer and other maps online and via the OS Maps Android app. I used version 1.0.2 of the app on a Nexus 5 as the main mapping application for a week wandering around North Wales (along with a copy of Costal Walks Around Anglesey).

This worked well. It was useful, it solved a few problems, and we didn’t get lost. It’s also a more convenient way of finding my way compared to my default technique of paper map, plus the occasional panic conversion from GPS to grid coordinates.

I didn’t notice any particular drain on my phone compared to similar applications. But then again, it mostly just sits in a pocket and gets checked from time to time. Parts of the application are slow (8 seconds to start; 18 seconds to show a list of recorded routes), but once you’re out and using the map, it does what it needs to do.

What it lacks is a way to download maps you have on subscription. That is, some way to “pin” a map so you know you definitely have it on your phone. Maybe I was lucky with the coverage I had and was able to stream enough of the map. Or maybe I’d managed to cache enough of the map before walking. Either way, it wasn’t a problem on this trip, but it is something that bothers me.

More worrying is the password handling. I was unable to sign in when I had a password with “&” in it (and possibly other symbols). This makes me wonder what the hell is happening with my passwords to have those kinds of restrictions on them.

You can record a route as you walk it. I do this to occasionally share the route, but mostly just for fun (“ooh, that was 12.8k”).

It’s not easy to share the route. Routes don’t sync to the online site, which is kind of what I expected it might do. You can export a route to a gpx file, but when I tried to upload a GPX export to the online version of the site, that produced the message “Import failed”.

So, early days for the tracking part of the app. You’ll find better tracking applications elsewhere.

However, there’s one killer feature of the tracking that will make me stick with it. The developers have handled failure really well.

During my week I had two crashes. One was when the app failed, and one where the craptacular Nexus camera app decided to reboot the whole device:

So in both cases, OS Maps picked up and carried on.

Apps crash. Phones crash. It’s good to see that OS Maps appears to be acknowledging this fact of life. For that reason, and the great OS maps themselves, this app is looking like a keeper.