Like many others I’ve been using Keep for a while. I’ve only started using it as a daily journal/todo list since the start of 2016.

I follow the (now quite old) Do It Tomorrow way of working. In summary, there’s a surprising amount you can put off, and by doing so you can stay focussed on what you’re doing today. Putting things off doesn’t mean you’re being slack. It means you’re giving attention to what needs to get it done, getting some focus and traction on tasks, without dropping other things.

As I’ve said before, there’s a bit of coaching flimflam to get through in the book (“Effectiveness = Creativity x Order”, WTF?). But I’m just looking for useful ideas to adapt and use, not a “todo religion”. And Do It Tomorrow has somehow stuck with me over the years.

How I use Keep

I’ve implemented Do It Tomorrow inside keep like this: 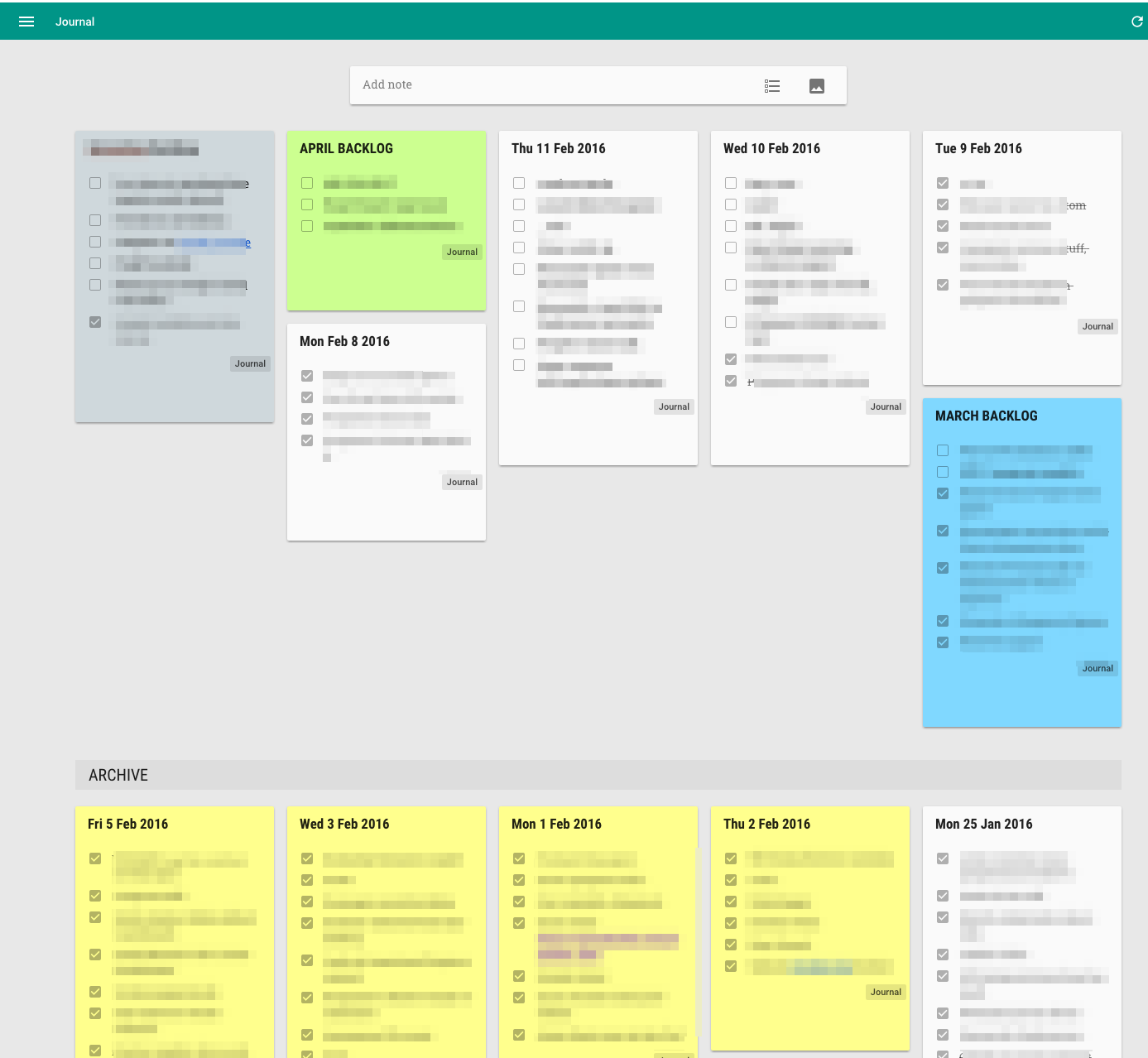 The basic idea is a closed list for each day. A closed list is the list of things you will do, and you draw a line under it: nothing else gets added today (subject to common sense).

So I have a dated list for each day. I tend to create days as I need to, and usually have a week up on screen at a time. At the end of the week, I archive them in Keep, which moves them down the screen, out of the way.

Every day, I complete the closed list. Anything new that comes in I slot into another day.

The bonus of this is you get a journal of stuff you’ve been doing, so you can see where your time has gone.

Another Do It Tomorrow ideas is the current initiative. This is the goal you want to achieve, and you do something on it every day. (No excuses, and first thing every day, it probably says in the book). If you don’t progress your current initiative (whatever it is), it’s not going to happen.

I’ve implemented that as separate lists, giving a colour and title to match the project (it’s the grey one in that screen shot).

Additionally I’ve found I have tasks that I want to get done, maybe sometime in the month, but not on a specific date. I create a backlog of them. I’m not sure how well that is going to work out, but I’m trying it.

So that’s what I’m doing now, and I’m liking it.

I suspect I’ll do something else in a year or so. I say that because I have a suspicion that the way to stay motivated to be organized and productive is to change tools. Refreshing how you look at your work can, I think, make it easier to be motivated.