Tim kindly lead us through “hello world”, and these are my notes on what we did, specifically on macOS. I’ve added in a few comments after ducking around after the event. 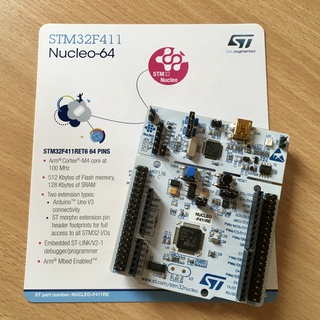 This one has an Arm Cortex-M4 chip plus a programmer/debugger so we can send it compiled code, and debug the code as it runs. More on the hardware and what all that means later.

In the first session we:

Running in the emulator

The steps to follow are all in the The Embedded Rust Book, but below I’m showing the commands I used for macOS.

To start out, we worked with an existing template project created with a cargo generate command. This particular template is set to run on the Cortex-M3 architecture, so we need to install that:

We also installed the QEMU emulator, and Rust tools to give us commands to work with GDB:

openocd is the Open On-Chip Debugger, which is a bridge between GDB and the hardware.

With those dependencies in place, we can create a project:

Parts of that code are unfamiliar to me, but I’ll come back to that in a minute. For now, compile the code:

We can change the behaviour of cargo run to execute the emulator, but I ran this code manually as:

First win there: we can compile and emulate embedded code.

Going back to the code, there were a few new things I’d not seen before.

Tim pointed out that you can run a Real Time Operating System on this kind of hardware. However, using “bare metal” Rust means you can make use of the borrow checker and type system to give safe access to registers and other mutable state.

The extern crate panic_halt line is selecting how we want to handle program panics. A panic is something you might do in code, and the behaviour is defined in Rust with a standard library. Without the standard library, we get to pick what behaviour we want. The panic_halt causes the process to loop forever. I guess we can write our own if we wanted to, but there are already a bunch to pick from.

I can sort of see why #![no_main] is used. The signature of the main takes an array of arguments. We’re not going to have that, so sure, we’ll need to do something else.

Related to that is the #[entry] attribute. That comes from one of the library dependencies, listed out in Cargo.toml:

The documentation for cortex-m-rt gives the details for entry, stating it’s called by the reset handler, which I guess is part of the Arm architecture.

The signature of that main is () -> !. The ! there is the bottom type, called Never in Rust. There are no values with this type: it is “not inhabited”, as opposed to the Unit type that has exactly one value, or a bool type that has two (true, false).

Never is used to signify a diverging function, which is one that doesn’t return normally (perhaps looping forever). As our program is the only thing running on the hardware, chances are we don’t want it to stop.

Finally, hprintln! and debug are from the “semihosting” package. Semihosting allows the Arm processor to make use of I/O on the host computer (i.e., my laptop). In other words, we see debug output on a laptop terminal window without any extra cables. The hprintln! does what you think it does, and the debug::exit reports a success status code back to the debugger.

Running on the hardware

Next up is to reconfigure the project to run on the real hardware. We need to install the Cortex-M7F target with hardware floating point:

Now there are a lot of names and numbers floating around. “thumbv7em-none-eabihf”? STM32? Nucleo-64? Here’s what they’re all about:

Ok. So we have the right platform installed for the hardware we have.

We’re going to recompile the project, but first we need to make a few configuration changes:

I’ve put these changes in a pull-request against the code I ended up with.

To fire the code down to the hardware and log the results, the sequence is:

I should have removed the debug::exit call, apparently, but I didn’t. One for next time.

All of this is in the Rust Embedded book, along with plenty more. Well worth browsing.

The code I’ve used is in a repository on Github.

Thanks to Tim for suggestions on improving this post.