There are full references and other links at the end of this post.

I’m a software/AI person trying to understand the language and ideas in ageing. If you spot places where I’ve misunderstood, I lack a clue, or you have suggestions, do get in touch. Twitter or LinkedIn are probably the easiest ways to grab me.

Ageing is a progressive decline in how we function. There are other aspects of ageing in society, but I’m thinking only of the biological ageing here. (If you’re interested in a broader treatment, take a look at the Sep/Oct 2019 issue of MIT Technology Review, which includes articles on product design and attitudes to ageing.)

Where does this decline come from? In general, it is:

Why does it matter?

This age-based deterioration is the leading risk factor for many diseases, including diabetes, cardiovascular, and neurodegenerative problems. Some of these conditions have no long term treatment, let alone cure.

And yet some people can live without these problems. They have both a long healthspan and lifespan. We now know genetics and biochemistry control ageing (more on that later). So the question is: can anyone potentially live without having to experience long periods with one or more of these diseases? If so, what kinds of lifestyles and treatments might give us that?

There are a few common words and phrases that are worth knowing before diving in any deeper:

In 2013, The Hallmarks of Aging proposed nine common features of ageing. To be included a hallmark had to:

I’ll list out the nine hallmarks below, but I think it helps to know they fall into one of three groups:

Let’s look at the nine hallmarks by group.

The causes of damage

Bear in mind that cause and correction aren’t fully worked out. But the items listed below are hallmarks because they have shown increasing them speeds up ageing (and in some cases the reverse has been shown).

This second group of hallmarks are beneficial in low doses (offering some kind of protection or repair), and bad when high (which happens during ageing).

Causes of the appearance of ageing

The final two hallmarks are the result of the other seven we’ve seen:

“The primary hallmarks could be the initiating triggers whose damaging consequences progressively accumulate with time. The antagonistic hallmarks, being in principle beneficial, become progressively negative in a process that is partly promoted or accelerated by the primary hallmarks. Finally, the integrative hallmarks arise when the accumulated damage caused by the primary and antagonistic hallmarks cannot be compensated by tissue homeostatic mechanisms. Because the hallmarks co-occur during aging and are interconnected, understanding their exact causal network is an exciting challenge for future work” (The Hallmarks of Aging, p. 1209).

There’s plenty of evidence to accompany the hallmarks, and that evidence suggests interventions to reduce ageing. Here are a couple of them.

There are a family of proteins called sirtuins, one of which is SIRT6. SIRT6 is involved in laying down histone acetylation (a sort of epigenetic change), and this reduces with age.

You can see why there’s a search for a drug that can have this effect, via this mechanism, without causing side effects.

Take a look at the signalling pathway relating ageing and dietary restriction (this is figure 4A from The Hallmarks of Aging, p. 1202): 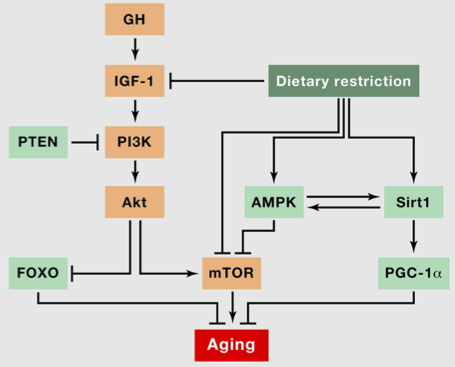 The diagram is mapping out the nutrient sensing hallmark. We can see that mTOR, an enzyme, has a role in increasing ageing, while dietary restriction inhibits mTOR. This is one way in which to understand how nutrient sensing impacts ageing.

This suggests targeting mTOR may have benefits for ageing. Rapamycin, a compound that inhibits mTOR, is being investigated for this.

The paper is important because it gives a framework for thinking about ageing and how we might improve healthspan. Even if you don’t read the paper, have a look at figure 7. It shows possible treatments (based on experience with mice). 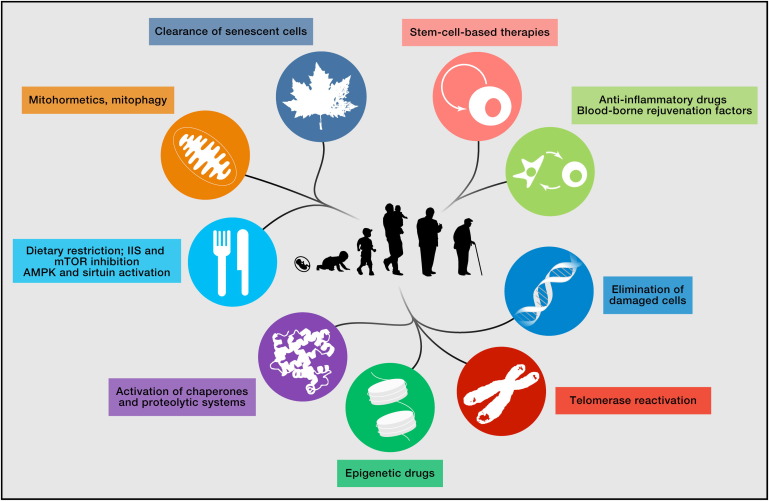 If you’re interested in learning more, scroll down through the reading below. Don’t miss the short video at the bottom.