1R (“one rule”) is a rule learning algorithm that first appeared in 1993. It’s a baseline algorithm: if you can’t do as well as this, you need to think again. This post describes my implementation in Rust. For me, implementing an algorithm is a fun way to improve my knowledge of a language and ecosystem.

Those are both libraries (crates, in Rust terms). I pulled them together into an application. This application, oner, reproduces some of the original 1R experiments and findings.

All other links are at the end of this post.

Given a set of labelled data, 1R picks the one attribute (feature, column) that best predicts the label. That does not mean it’s the best predictor of the data, just that it’s a simple predictor. It’s a baseline for comparison to other algorithms.

In the history of AI, 1R turns up around the time when there were developments of sophisticated rule learners, such as C4. And yet, as the title of the 1R paper from Robert C. Holte, states: “Very Simple Classification Rules Perform Well on Most Commonly Used Dataset”.

An example 1R rule might be in the form:

This example is from a dataset that contains measurements of different species of Iris:

…and so on for 150 examples of these three species.

The problem is to classify a species from the measurements. This 1R rule has selected the petal width as the most useful attribute. It doesn’t do too badly. I’ve tried to illustrate the rule boundaries plotted against each of the different plants: 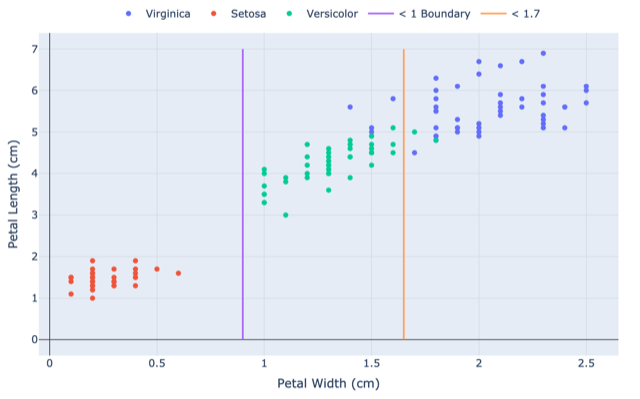 That’s what 1R is about. BTW, there is an even more straightforward rule, called 0R (“zero rule”). This is the most common species in the dataset. That is, you pick the most popular classification, and you predict that for everything.

What I learned from implementing this algorithm

I implemented the algorithm to stretch my Rust muscles and get some more experience with the language and ecosystem. There are arguably more convenient versions of 1R in R and Python, so you don’t need this code.

But here’s what I learnt.

This was my first go at publishing Rust crates. As mentioned, I split the code into two crates and implemented an application to dog food them.

The culture of docs.rs means I’ve ended up writing much better user documentation that I would have. It just seems to be expected. Plus, having Rust compile and test the code in comments, means there are no real excuses not to.

I’m struggling with a lack of a data frame or similar construct for holding test data. I’ve selected ndarray as a basis for data mangling. I did that because it seems to have a good ecosystem, which I’m still learning about.

I picked Rust, partly because I like it, but also for performance. (Not just for this project, but for a few machine learning projects I’m working on: I have a bunch of computations I want to run fast).

I’ve not tried to optimise the running of the code in any way at all. I know I’m doing some suboptimal things in places, but those are things I can fix in time.

I did just assume Rust be faster for these scenarios compared to my go-to language of Scala. However, I eventually did test out that assumption on a simple project that’s representative of the kinds of things I want to do. I used GraalVM native compilation as a comparison. As expected, Rust is a lot faster. For me. On these projects. There are still lots of applications where this doesn’t matter. But for what I’m working on right now, this is reassuring.

For the work I’m doing I want to be able to replicate anything I do at a later date. Given a Git commit hash, a set of parameters, I want the same data to produce the same results. I thought I had this sorted with storing a random number seed, but I was getting variable results.

I traced this down to Rust’s default hasher. I was computing a frequency count by using a hash map, and the hash map is randomly seeded (for good security reasons).

The incantation to use a deterministic hasher was:

I found it interesting that the type of this value is not a HashMap<K, V> but instead includes the hasher in the type signature:

…for some key and value, where FxHasher is the deterministic hasher I’m using.

It’s been a lot of fun implementing this in Rust. I think taking on an algorithm and pushing through to implement it all is a good way to grow your knowledge of a language.

And as a consequence, there are now two crates and an application relating to 1R, if you want to try them out.