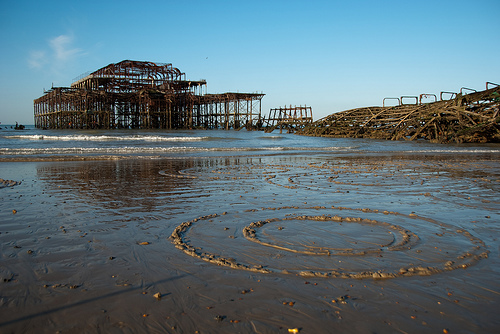 The other night I sat down to satisfy just one more quick-fix screen-scraping twitter-based itch. Of course I decided to scratch using Scala, and it really is an attractive language for “doing stuff”. It also made me reflect on how Scala has already started to changed the way I write software.

Here’s the itch: If you live in the centre of the pebble-beach city of Brighton, and have a dog, the tide times become really interesting, because at low tide sand is revealed, and sand is fantastic to play fetch in. You can get Brighton tide times from VisitBrighton.com, but of course I want the information at the point I’m going to use it. And for me, that means I want a tweet at 6:30 every morning. And so, @brightontide was born (I’m still chatting about copyright with the council, so it might have to disappear).

The problem could be boiled down to curl -> grep/sed/awk -> curl, but there’s the added complication that tide times are in GMT, and I want to tweet them corrected for daylight saving.

So with that background out of the way, here we go…

In essence I want to get the tide times for a given date:

I’m using the Joda Time classes LocaDate and LocalTime to represent a date (without time) and a time (without a date). The Tide class is just a wrapper for the time and height of the tide, plus the method for converting the time into the right timezone:

Next I need to implement a TideSource and, until I find something less hacky, that will be an implementation that scrapes the data from VisitBrighton.com. I want to use it like this:

Here’s the code to allow that:

There’s nothing particularly exciting in any of this, but there are a couple of things that surprised me. The first is the zip function, which I distinctly remember reading about and thinking at the time: “nice, but there’s no practical application I’ll write that will ever need that” :-) But here we are, with a page layout where I have two columns of numbers that need to be paired up: exactly what zip does, and it saved me a couple of loops.

The regular expression is a bit hairy. You can figure out what’s going on if you view the source of the page: 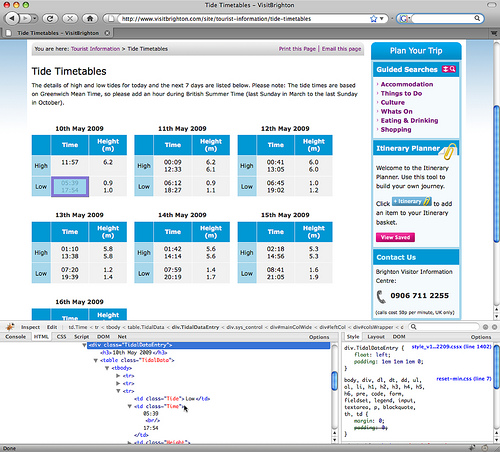 But that code is going to need a unit test. But how to “mock out” the HTTP request? In Java, I probably would have separated things more so I supply the content of the HTTP request to another method that processes it. Or maybe I’d have a factory to supply something that can fetch the HTML; or perhaps I’d use dependency injection…. but this is a quick script, to do a hacky job… but I do want to test it. It turned out to be so very easy:

Nothing you can’t do in Java, but here it feels so concise and easy that it something that becomes usable for a unit test.

Here’s the corresponding test code that uses this test scraper:

Putting it together, you get:

I’ve skipped some of the details:the source is on github [update: it’s evolved a little since this blog post].

This isn’t exactly great code (error states returning Nil? Twitter passwords baked into the source?) but it was an absolute joy and pleasure to write it in Scala. 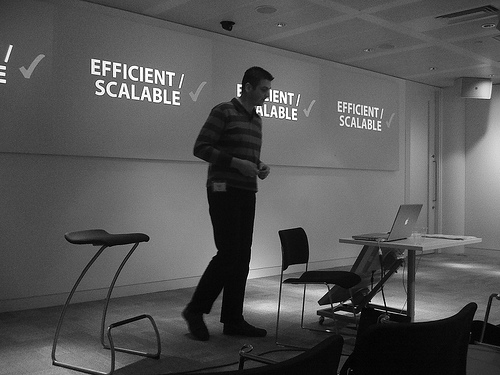